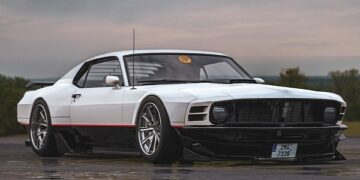 Ford keeps introducing new versions of the Mustang and it’s safe to say not all of them live up to expectations. Today, we want to look back at what many say is the best looking Mustang ever, the 1970 Boss 302.

If you’re not a fan of the new Mach 1, this will probably appeal to you – simple, classy, but still very sporty. Digital artist Rostislav Prokop took the Boss 302 to the next level using his widebody digital magic, and the results are as good as the top restomods.

We don’t know exactly what’s going on with the paint, but the two-tone theme is apparently called “Talisman.” It looks like a reverse of the scheme offered on the Fox Body back in the late 1980s.

In the bodywork department, the already aggressive Boss 302 has its features exaggerated using fender extensions that follow the natural shape of the car. Ground effects are then added in the form of carbon fiber skirts,…