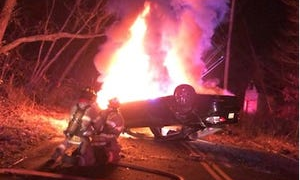 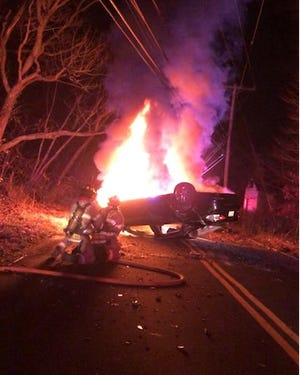 MONROE – Township police released dashcam footage showing a heroic Thanksgiving Day rescue in which a 30-year-old man was pulled from a burning overturned vehicle in a suspected DWI crash.

The three-minute video, posted on the Monroe Township Police Department’s Facebook page, shows Officer Douglas Perrone driving along Pergola Avenue before spotting a car up the road fully engulfed in flames. Perrone is then seen running up the road carrying a fire extinguisher toward the car as flames shoot into the air.

Meanwhile, someone is heard yelling that someone is in the car, as other people are also seen running toward the vehicle. The officer is also heard saying the car is fully engulfed and people are trapped in the car.