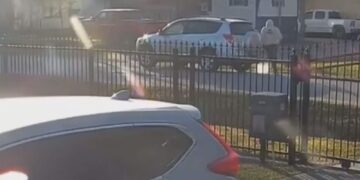 HOUSTON – Houston police said someone left a little boy in the road in north Houston after stealing the vehicle he was in.

Surveillance video from New Haven Drive shows a vehicle suddenly stops around 8:30 a.m. on Monday morning. Someone gets out and runs around the vehicle.

As the camera turns, the driver appears to leave something in the road and then take off. A delivery driver and a neighbor later discovered it was a five-month-old boy.

“I could not imagine somebody would do that and I could also not imagine that nothing happened to the baby because this is a really busy street in the mornings,” said neighbor Dante Garcia, who lives across the street.

He said it was a miracle the little boy wasn’t hurt.

“There were countless ways this kid could’ve been harmed and nothing happened,” Garcia said.