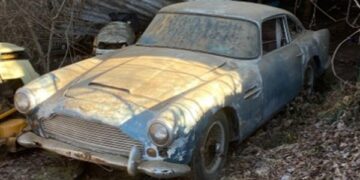 491
SHARES
1.4k
VIEWS
Share on FacebookShare on Twitter
Not long ago we were showing you how the Stig managed to get his hands on an Aston Martin DB5, albeit a replica car, and then proceeded to slide it around like the absolute madman that he is. This publicity stunt was used as a way to promote the upcoming James Bond movie, titled “No Time to Die”. And there’s sort of a Bond vibe surrounding the story of this 1962 DB4. This is a car that could do 139 mph (223 kph) back in 1960!An Authentic British Legend
The first DB4 rolled off the factory floor in 1958, and by 1963 a total of 1,204 units were built. 19 of those units were slightly more special as they were modified by Zagato in Italy. Even though the car we’re looking at right now didn’t get the special Italian treatment, it’s still one extremely rare vehicle. We won’t go into all the technical details of the DB4, which would most likely be a blast to drive even by today’s standards,…
Read full Story ➤
Share196Tweet123Share49