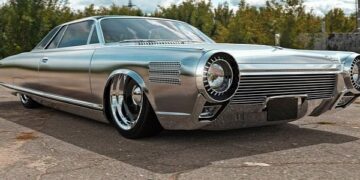 491
SHARES
1.4k
VIEWS
Share on FacebookShare on Twitter
The Turbine Car is only the tip of an iceberg that saw Chrysler working on such engines for about four decades. The advantages gas turbines deliver compared to reciprocating engines mostly rely on their much simpler construction, which leads to superior reliability and smooth operation – the turbine had 80% fewer parts than a typical piston engine.

Looking past airplanes, where such hardware is used to generate trust, we find gas turbines on tanks and helicopters, so why didn’t the technology spread to cars? Well, in spite of Chrysler’s solid and prolonged efforts, drawbacks such as the poor city driving fuel economy and emissions eventually got in the way. And, as Jay Leno aptly puts it in the video below, the fate of this automotive development is not unlike that of the Wankel engine. As such, when Chrysler ended up seeking a government loan back in 1979, the program had to be put…