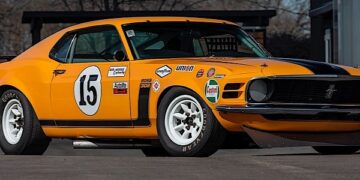 The name Bud Moore speaks volumes in NASCAR. A soldier who landed with the 4th Infantry Division on the Utah Beach in Normandy in 1944, the man came back to America and created what would become known as the Bud Moore Engineering team, one of the biggest names in the game for a couple of decades, between 1960 and 1980.

Bud Moore Engineering, which went out of business in 2001, won a total of 63 races and took home two drivers’ championship titles. Moore himself was inducted into the NASCAR Hall of Fame in 2011.

The team’s cars of choice for racing were generally those made by Ford (although some other makes were used throughout the years), with the Mustang Boss 302 occupying a special place in the team’s portfolio.

The car you’re now looking at, a School Bus yellow example wearing Moore’s signature number 15 on the body, is allegedly the last one created for the team’s…