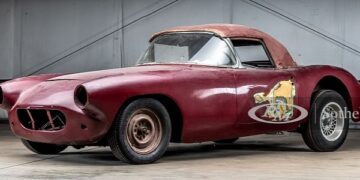 491
SHARES
1.4k
VIEWS
Share on FacebookShare on Twitter
It is one of those very rare cases when a car that has seen far better days sells for a record price because of its incredibly rich history. This particular car is one of the three Chevrolet Corvettes raced by Briggs Cunningham at the 1960 24 Hours of Le Mans, developed with covert assistance from General Motors. It is car #1, or chassis 3535, it’s been through two severe accidents, has been modified to the point where it’s no longer recognizable, and it’s in poor condition. It is also a “milestone in motorsports history.”

When Cunningham entered a partnership with GM in 1959, he’d been racing for almost a decade, trying and failing to secure a Le Mans victory. The 1955 Le Mans tragedy that killed 83 spectators and a driver meant that, by 1957, the Automobile Manufacturers Association ban on American car manufacturers was in full effect. But General Motors was still…