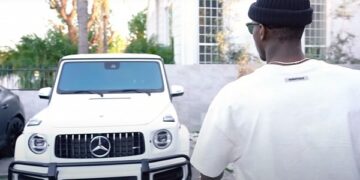 491
SHARES
1.4k
VIEWS
Share on FacebookShare on Twitter
It’s probably why the vehicle in Dennis Schröder’s garage that sees the most action since signing for LA Lakers last October is his Cadillac Escalade. There’s a reason American cars are the way they are, and it’s because they fit American needs, so no matter how German you are, you’re still probably better off using local models while living in the States.

Dennis is also quite the family man if you look at the two sons (a toddler and a baby) he has with his wife, Ellen, so as anyone with two kids will tell you, a large SUV makes the most sense in this situation. And if the Escalade is anything, that’s large. It’s also quite ubiquitous, making it perfect for blending in when you don’t want to draw any attention.

Following the Escalade, Dennis introduces us to his white Mercedes-AMG G-Wagon, an SUV he plans to have sent to Germany so he can use it over the summer period. He also points…